In April of 1894, the Morrisville Town Council began the construction of a system of water supply to provide fire protection and adequate water for the 1,200 inhabitants of the Borough at that time.  The project was completed in October 1894, and the first water permit was issued to Charles S. Taylor on Washington Street.

A committee of council oversaw the expansion and operation of the water system until 1948, when the Morrisville Town Council recognized the need for a separate board to manage the affairs of the water system.  On February 10, 1948 the Town Council met and by motion and unanimous vote introduced an ordinance to establish a “Water Board of Authority,” which thereafter was adopted on February 20, 1948 authorizing submission of the first Articles of Incorporation for “The Municipal Authority of the Borough of Morrisville.”

The first meeting of the members of the board of the Municipal Authority of the Borough of Morrisville was held April 9, 1948 at 8 o’clock, p.m., when the charter of the Authority issued by the Department of State was duly presented and read.  The first officers of the new Authority were Alfred O. Redland, Chairman; Harry Simpson, Vice-Chairman; Harris W. Voorhees, Secretary; Herman L. Margerum, Jr., Treasurer; Willard S. Curtin, Esquire, Solicitor; and, Harry H. Lee, Engineer.

The Municipal Authority has owned the water system since 1948, with addition of the wastewater (sewage) collection system and treatment plant which were completed in 1956.

The original 1894 water works was a 100-horsepower Thropp Boiler and a Blake Steam Pump, at the location of North Delmorr Avenue and East Trenton Avenue.  Four-fifths (4/5) miles of pipe and 29 fire hydrants were installed.  A new plant was built on the river side of North Delmorr Avenue in 1922 which remained in operation for 40 years.  Increased demand for water and limited room for expansion at the North Delmorr Avenue site ultimately required the Authority to build a modern water plant on River Road north of the Calhoun Street Bridge.  Construction of that existing 6,000,000 gallon per day (6 MGD) plant took place in 1967-68 and, with many upgrades over the years, it remains in operation today.

The wastewater (sewage) treatment plant completed in 1956 served only Morrisville Borough at the time, and was designed to handle 2.5 MGD.  Modifications were made in 1964 to accommodate new sanitary sewer installations in Lower Makefield Township and Yardley Borough; and, a significant plant expansion in 1973 brought plant capacity up to 5.6 MGD.  Lower Makefield and Yardley each contributed to the capital costs of the 1964 and 1973 upgrades, as well as the 1986 wastewater plant expansion to its currently rated (licensed) capacity of 7.1 MGD, with a hydraulic capacity of 8.7 MGD.  To this day, Morrisville, Yardley, and Lower Makefield remain parties in a cooperative municipal agreement allocating wastewater plant capacity. 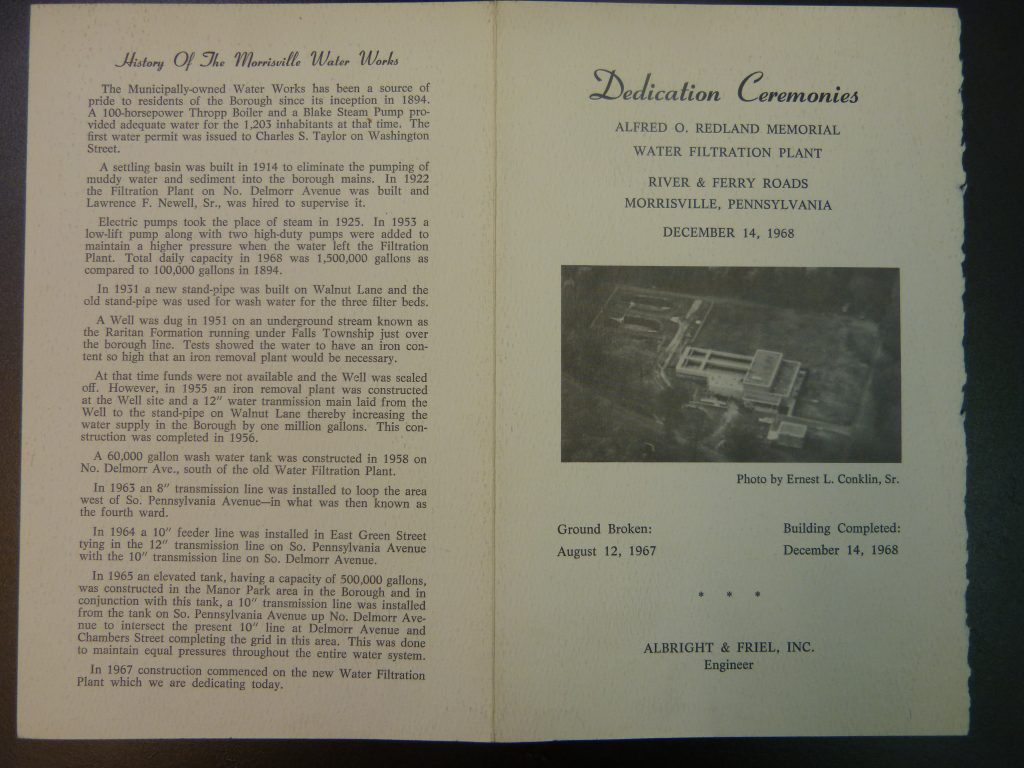 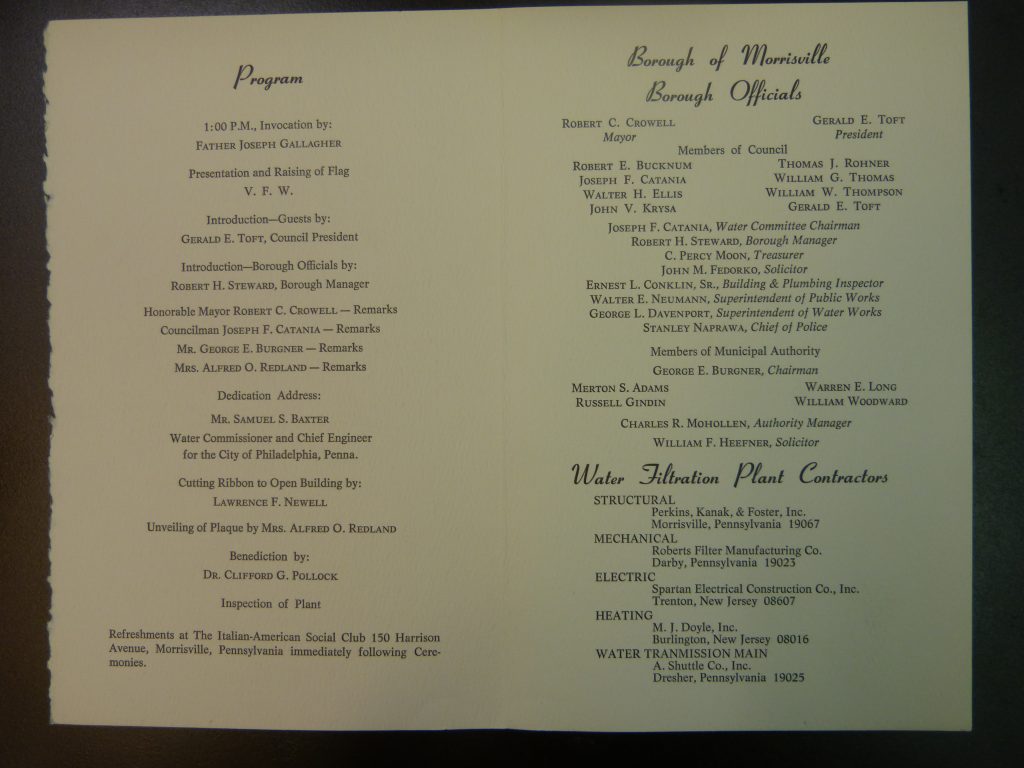 The Municipal Authority was established in 1948, and is committed to supplying clean, safe drinking water to the residents of Morrisville Borough and its extended service area while protecting the environment by returning clean, safe water to the Delaware River.